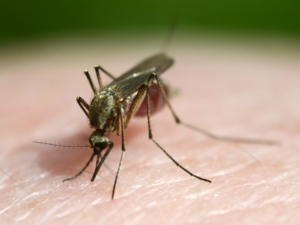 What is a Vector?

Vector-borne diseases are some of the oldest diseases known to humans. Malaria, Typhus, and Rickettsiosis are all in the 10 oldest illnesses on earth. They account for more than 17% of all infectious diseases across the world. “Transmission of vector-borne infections are facilitated by multitudes of mobile, intelligent carriers who disperse from the source of an infection then hone in like guided missiles on new victims.” Every year there are over 1 billion cases and close to 3 million deaths from vector-borne diseases. These diseases include Malaria, Zika, Dengue Fever, Lyme Disease, West Nile Virus, Leishmaniasis, Chagas Disease, Yellow Fever, Rocky Mountain Spotted Fever, Japanese Encephalitis, and African Sleeping Sickness. 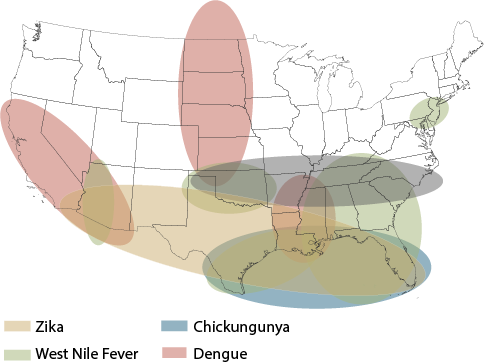 Mosquitoes date back over 280 million years, over that time we have found over 3500 species worldwide, 175 are found in the US. Some mosquitoes may even travel up to 100 miles from their breeding habitat. Mosquitoes are most commonly found near ponds, marshes, swamps, and other wetland habitats. Only female mosquitoes bite, because she needs the protein in blood to help her eggs develop.

Zika Virus – Considered an epidemic in the US. This virus causes a severe birth defect called microcephaly, causing abnormally small heads in children leading to brain issues. Symptoms are fever, rash, joint pain, and conjunctivitis.
Dengue Fever – A mosquito-borne tropical disease. Over half of the worlds population is at risk of contracting Dengue. Making it the 2nd most distributed vector borne disease in the world. Symptoms include fever, headache, pain behind eyes, and joint pain.
Chikungunya – Symptoms of arthritis can be severe and disabling, sometimes lasting for years after being infected.
West Nile Virus – Mostly found in the United States. The virus can cause disorientation, coma, tremors, seizures and paralysis. Some of the neurological effects can be permanent and fatal.
Malaria – The most fatal and well known vector disease throughout the world. It has been said to be responsible for the half of human death dating back to 2700 B.C.E with flu like symptoms it often goes untreated leading to acute kidney failure and severe anemia. Some people report relapses months, and even years after being treated.
Yellow Fever – Normally found in parts of South America and Africa. It causes severe flu like symptoms, potentially resulting in death. Its name comes from, sometimes making the infected persons skin look yellow. 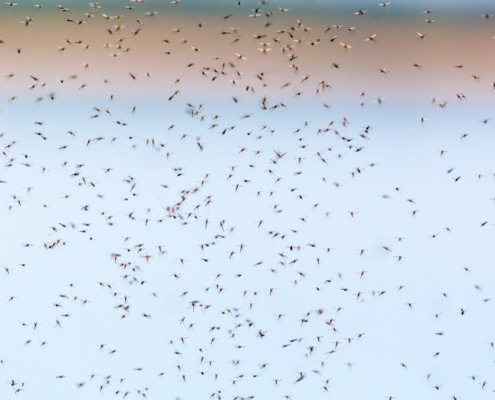 Why are They Attracted to Us?

Female mosquitoes have nerve cells called cpA neurons that detect different odors in the air. These neurons can detect humans from far away which is why they are the most deadliest predator in the world. Below is a list of odors that humans emit that attract these insects.

Carbon Dioxide – Mosquitoes & Ticks are attracted to Carbon Dioxide which can be found all over nature including our breath. Every time we exhale carbon dioxide is mixed with a number of other chemicals to make your own unique smell. Adults exhale more Carbon Dioxide than children which is why they get bitten more often. Larger adults and pregnant woman are at higher risk as well.
Lactic Acid – Built up when we are active or when we consume certain foods such as yogurt. Lactic acid concentrates within the surface of the skin which the cpA neuron can detect. Showering can decrease the odor of lactic acid.
Body Odor – Bacteria mixed with sweat is what produces body odor. Without bacteria humans would not have a scent. When showering beware that mosquitoes can still be attracted to the fragrant body washes.
Blood Type – Recent studies have shown that mosquitos are more attracted to blood type O and least attracted to those with A blood type. Using Technology we can avoid being bitten by masking these odors when we are outside. We can also produce odor attracting objects to remove them from a certain area. 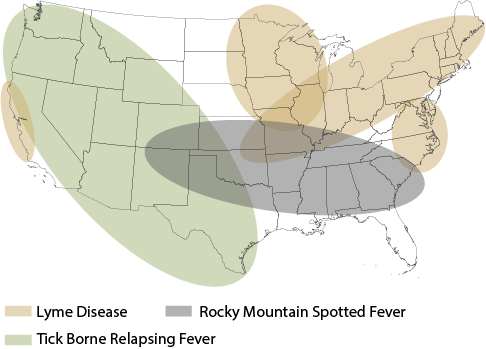 Ticks are mainly found in large grassy or wooded areas, and can live as long as 200 days without food or water. Ticks make a small cut on your skin and insert the feeding tube which can have barbs to help keep the tick in place. Ticks also secrete small amounts of saliva with anesthetic properties so that the person can’t feel that the tick has attached itself. If the tick is in a sheltered spot, it can go unnoticed. Most ticks have to be attached to the host for 24 hours to transmit a disease.

Lyme Disease – Best known for causing a “Bullseye Rash.” It is the most common vector borne illness in the US. The disease can only be transmitted by the blacklegged tick. Symptoms are usually fatigue and dizziness, but can progress to facial palsy or severe Arthritis.
Rocky Mountain Spotted Fever – A serious illness that can be fatal in the first eight days of symptoms if not treated correctly, even previously healthy people are at risk. The illness causes a large spotted rash across your whole body, but is usually misdiagnosed. The long term effects can cause damaged blood vessels resulting in loss of circulation to fingers, toes or even limbs, eventually leading to them having to be amputated.
Tick-Borne Relapsing Fever – Only occurs in the western United States. If it isn’t treated quickly fever symptoms can come and go for a couple of weeks.
Tick Encephalitis – This illness in normally transmitted to humans from a tick bite, but infection can also happen from drinking milk from infected goats, sheep, or cows. Symptoms are usually mild but, can cause severe infection and inflammation of the brain.
Lone Star Allergy – Located in the US, bites from this tick have been known to cause a beef allergy and you cannot eat it for the rest of your life. There is not a lot of research that has found a cause to why this happens.

What are the EPA Approved Avtive Ingredients for Insect Repellents?

IR3535 is a Bio-Pesticide that is naturally derived from the amino acid Beta-alanine. Meaning that it is “technically” found in nature.

What is a Bio-Pesticide?

Bio-Pesticides are naturally occurring substances that control pests via non-toxic mode of action, they are considered much safer than poisonous pesticides.

Can I wear Sunscreen with a Insect Repellent?

Yes, you can wear both! If you are also using Sunscreen, apply Rugid Zinc Oxide Sunscreen first, then Rugid Insect Repellent second.